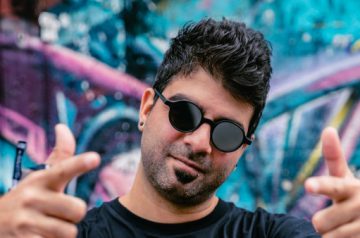 A new entry into the Top 100 last year, Israeli psytrancer Blastoyz – aka Kobi Nigreker – has ridden the momentum of last year’s success. Against the odds, he says, he’s still managed to play shows in Israel and Europe, and even got in a two-month tour of Australia.

The biggest news has been the launch of his own record label, WELVRAVE. Setting off with ‘Bali’, a collaboration with fellow Israeli Omiki, it’s a statement of intent that follows recently turning 30 — an event captured on his In Between YouTube series.

What’s to follow remains to be seen, but he promises he’s sitting on plenty of new music, helped by the building of a brand new custom studio. For now, he’s back on the road building his reputation gig by gig. This September saw him play a 2000-year-old Roman amphitheatre in France, joyous dancers forming a rising wave of pumping fists in front of him. Welcome to the psytrance revolution.

How was your first gig back after lockdown?

“It was in April 2021, a psytrance party in Israel with huge energy on the dancefloor! I mostly played my new music for the first time and I was blown away by the reaction of the crowd.”

How have the last 18 months changed how you view your work/life balance?

“It helped me to look at the bigger picture, to spend more time working on my art and to know how to make a better balance between life and work.”

What further steps should the industry take to combat climate change?

“I would suggest changing the paper-based mailing and ticketing system into an electronic one and swap plastic at home and outdoors for solid material that can be reused.”

What’s the best bit of tech you’ve added to your studio or DJ set-up this year?

“I actually rebuilt my studio this year to add some vibe and comfort.”

“There is no specific album I’ve heard this year, but I loved the latest releases from Martin Garrix – ‘Ytram’ and ‘Area21’.”